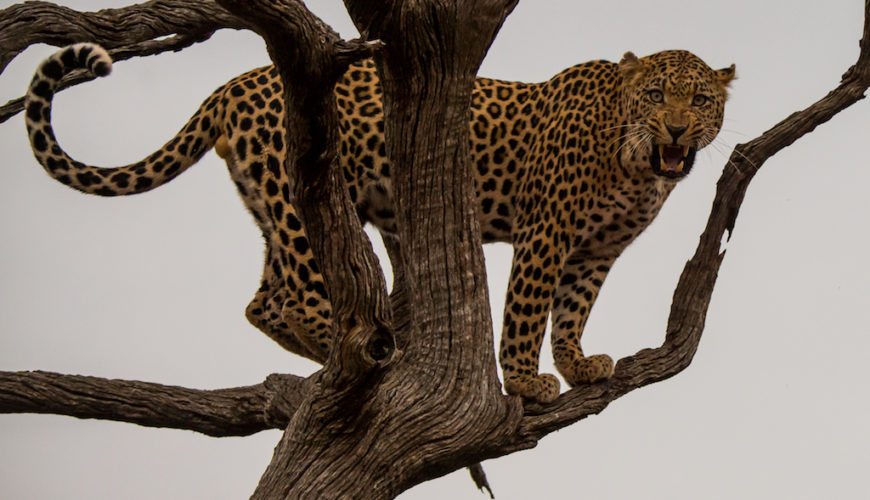 Africa is famous for the so-called Big Five – Lion, Cape buffalo, Elephant, Rhino and Leopard. The Big Five was originally a hunting term coined in the 19th and early 20th century and referred to the most dangerous animals to hunt on foot. Having said that, the only shooting I personally prefer, is through the lens of my camera.

I was recently fortunate enough to capture a beautiful shot of a magnificent male leopard during one of our visits to a game reserve. Other than humans, the leopard has natural enemies such as lion, hyenas and the African wild dog. Our guide told us that because they are all predators, they compete for prey and are enemies, not tolerating each other’s presence at all. This particular leopard’s territory was invaded by a pack of African wild dogs, and once spotted they set off in hot pursuit. In a one on one battle, a wild dog stands no chance against the powerful leopard, but being confronted with a pack of 14 angry wild dogs, the Leopard had to make a hasty retreat up the nearest tree. From there he could survey his options without threat and after a while the wild dogs seemed to loose interest and he could make a hasty getaway.

We are often subjected to highly stressful situations and forced into some kind of battle or crisis. We may feel the odds are completely stacked against us. We realize that being passive is not a viable option and need to do something. In the heat of the battle, do you fight, flee or freeze? Now is not the time to close your eyes and hope for the best! Do you, like the leopard, know your limitations, play to your strengths, and survey your options in order to “fight another day?”